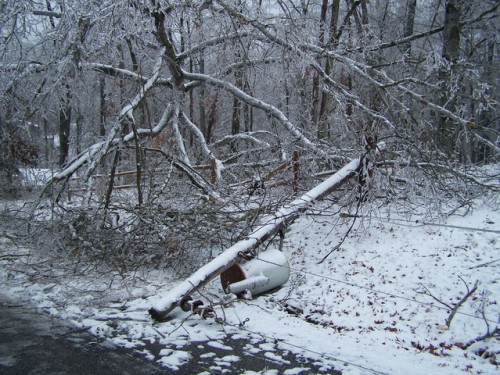 If I ever become dictator of the United States, my first act will be to require all power to be delivered below the surface. There will be no more ugly telephone poles with wires strung on them and no more power outages from fallen trees. The edict will be “Down with the poles and Up with underground wiring. Signed – Bob B, DIC (Dictator-In-Chief).

When the power goes out, the heat goes out and the water too if you have your own well. The internet goes, of course. We got hit. Power is back and so is Random Thots.org.

Global Freezing Report
Last winter, record low temperatures were recorded throughout Europe. Britain had the longest continuous cold period since 1981 and the coldest winter in 30 years. This winter has hardly begun, but so far it is colder than last, and with more snow to boot. Temperatures worldwide are declining faster than Al Gore’s speaking fees. This year, Atlanta had its first Christmas snow since 1882; Columbia, S.C. had their fist since 1887.

Record lows were recorded in Florida last winter. Stock up on orange juice. It could get expensive.