AMERICAN FLAGS TAKEN DOWN IN HAITI

President Obama bans display of the American flag in Haiti.

We, the people of this great nation, have reason to be proud of the manner and the extent to which the United States responds when a natural disaster strikes anywhere in the world. Soldier and civilian volunteer join the task of providing rescue, food, shelter and clothing for the victims. We act selflessly, asking nothing in return. Along with the flags of other noble nations, the American flag flies in the midst of a tragic scene to say you are not alone. We care. We are here and we are here to help.

But in Haiti, Obama will have none of it. The relief goes on, but the flag must not fly, not even over our relief headquarters. You see, to Obama that flag does not stand for a nation that is a force for good in the world. To Obama the banner we reverently call our Stars and Stripes stands for slavery, injustice and overbearing dominance in the world. To Barack Obama our flag represents the America he has come forth to change. Flying our flag at the scene of good works offends him because it conflicts with his perception of what America is and always has been. For America to claim good works, in Obama’s mind is hypocrisy.

If you consider my opinion to be extreme, consider this. A mosaic is a picture formed of bits and pieces, no one of which has significance in and of itself. However, by taking bits from here and pieces from there a clear picture begins to emerge. Here are some pieces.

Obama wept in the pew. Obama is a sincere man. Upon listening to a sermon on the subject “The white man’s greed is responsible for a world in need” Obama says he was so moved that he dedicated his life to righting injustice in this world.

Thomas Sowell, in his book A Conflict of Visions, explains there are two visions of social justice. One is of equal treatment and equal opportunity. This vision is a bedrock of American belief, the reason the United States is seen as the Land of Opportunity. The result however, is unequal outcome because people are not equal in terms of ability and application. The second vision of social justice calls for equal status, equal outcome. To achieve equal status you must take from the top and give to the bottom. This is unequal treatment. Sowell does not so state, but it is obvious this is the Marxist vision of social justice. It is also Obama’s vision.

Obama refused to wear an American flag pin during his campaign until political expediency led to pragmatism trumping principle.

Obama has made it a practice to denigrate, or at least apologize for America in speech after speech given abroad.

America’s heritage is British. Obama insulted the Queen with a gift of a tape of his own speeches and has deliberately slighted the Prime Minister more than once. The bust of Winston Churchill was banished from the White House and sent back to England prematurely. He has snubbed our best friend and staunch ally. He has flatly stated there is no special relationship between Great Britain and the United States.

Michelle, in what Barack must have seen as a political gaffe, has told us she never in her life had any pride in America, until her husband won the nomination. Michelle is also on record for telling young students that “America is a mean country”. I know, Michelle is not Barack. With no context her comments would be but stray pieces that do not fit. Place them in the mosaic or leave them out, as you wish, the picture remains the same.

Obama launched his political career with a fundraiser from the home of Weathermen bombers Bernadette Dorn and Bill Ayers who sponsored the event. Ayers is pictured standing on the American flag laid in the dirt of an alley. 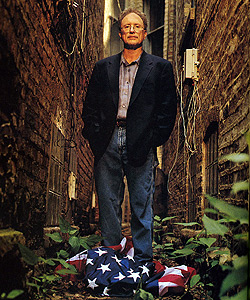 There is much more, to much to list here. Pieces are everywhere: “spread the wealth”, “superpower, like it or not”, a racist Boston policeman is invited for a beer, “some form of reparations would be in order”, favoring a Marxist Chavez acolyte over the people of Honduras, abuse of power in the forced transfer of assets from bondholders to the auto workers union, America is one of the largest Muslim countries in the world.

As long as this man remains President my prayer will not be God Bless America. It will be the plea God Help America.

This entry was posted in Political philosophy, Political polemics and tagged Haiti, Obama, Stars and Stripes. Bookmark the permalink.