5.9 EARTHQAUKE HIS DC, PHILLY AND NYC — OBAMA STRONGLY RATING IN CRASH TO -26%

An earthquake with its epicenter near Washington DC has caused has created havoc but no great damage and no deaths reported as yet. The Capitol building and the Pentagon were among many buildings evacuated and airports were closed. Check news sources for ongoing details.

The other shock.
The Rasmussen poll that tracks the spread between those who strongly approve and strongly disapprove of President Obama’s performance has gone from 30% plus on his first day in office to 26% minus now. Can we have the election now? Please? 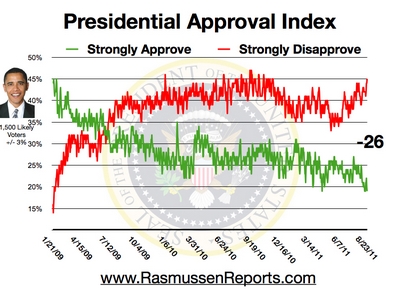 This entry was posted in News and tagged Approval index, earthquake, Rassmusen poll. Bookmark the permalink.