ROMNEY AND THE KKK CONNECTION 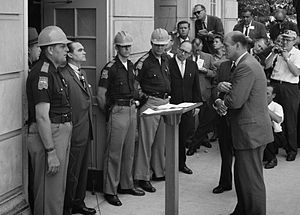 GEORGE WALLACE STANDING AT THE DOOR

CNN host Don Lemon wants to plant the idea in your mind that Mitt Romney’s belief that marriage is a union between a man and a woman is somehow equivalent to George Wallace’s stance that blacks should remain segregated forever.  Demonizing doesn’t get much more despicable than that.  Fortunately, it’s equally stupid.  When a black gay television host takes a religious belief held by 67% of the American people and calls it racist, the backlash will be far greater than any impact CNN or its host had hoped to make.

Few people today even know who George Wallace was.  No, he was not a news reporter.  He was elected Governor of Alabama in 1962 in a landslide on the promise to his constituents that he would fight to maintain segregation of blacks in America forever.  And he meant it.  He is also famous for standing in the doorway to an auditorium at the University of Alabama in a showdown with the federal government.  He stood in the doorway in order to block the entrance of two students because they were black.  George Wallace was, of course, a Democrat.

Now click this link and watch the CNN video.  It is very brief.

This is the type of journalism we are up against today.  One thing we have going for us is that the Left has not learned yet that they no longer have the only voice.  For years there was never a need to defend whatever they said.  As a result they set themselves up for easy ridicule and exposure of the nonsense and demagoguery they preach.

There is no KKK connection and the people know it.