MY LIBERAL FRIEND, CONSIDER THAT WHICH YOU SUPPORT

Palestinian terrorists entered the Samarian home of Udi Fogel, his wife Ruth, and their children. It was three days ago sometime between 11 and 11:30 pm. Udi, the father, was stabbed repeatedly as he lay in bed until he was dead. His son, Hadas, had gone to sleep in the bed beside his father. Hadas was 3 months old. The Palestinians slit Hadas’ throat. Father and son died in pools of each others blood.

Then they took Ruth to another room where they stabbed her repeatedly until she was dead. Two more children suffered the same fate. Elad, age 11 and Yoav, age 4 were all stabbed repeatedly until they were dead.

Believe me, I don’t mean to diminish the depravity of this act, but there is something even more disturbing than the tragic death of the Foley family. And that is the support given to those who regularly use these and other similarly gruesome methods to advance their cause. Support leads to endless ongoing massacres. For that reason, the support is even more disturbing than just the ugly event at the Fogel home.

There is no way to prevent occasional unspeakably atrocities. Witness Charles Manson and Jeffery Dahmer. Manson was not alone. He had his supporters and they had their cause. Can you imagine what it would be like to have the Manson’s of this world freed from prison, encouraged and supported by a significant political faction who didn’t support his methods, but, nevertheless, supported him and his cause?

You say that was different, my liberal friend? Yes, but how? The Manson massacre was inhuman and evil. Was the murder of the Fogels any less so? In both cases the slaughter was deliberate, pre-planned, without remorse and equally bloody. I know; I have seen pictures of both. I will tell you what the differences are. For one, the Palestinians include children as targets of their slaughter. Manson did not. For another, Manson and his followers were not supported by the liberal community in America; the Palestinians are.

I hear your screams of protest, my liberal friends. But consider this: If the Foley killings were a stand alone incident, my charge would not be justified. But this was not the first, nor will it be the last such family massacre. And I haven’t even mentioned the suicide bombings in school cafeterias, on buses and in public markets. If the Palestinian people generally deplored such acts, my charge would not be justified. But they don’t deplore it. They rejoice in it. City streets and squares are named in honor of such killers. It has become tradition to go into the streets after such an incident with trays of candy and bits of food, like hors d’œuvre, to share in celebration of the deaths of some Jews.

This is the culture you are supporting, my liberal friend. Are you proud?

You say you support the cause but not the methods. However, the methods are integral with the cause. The only control you have over the methods is to withdraw your support. Have you thought about that? You are on the wrong side of evil, my friend, and you should know it. 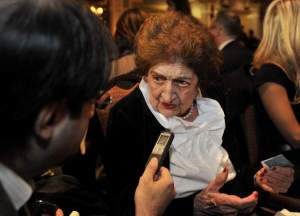 Helen Thomas, May 27, 2010
“Jews should get the hell out of Palestine” and “go home to Germany and Poland.”

Helen Thomas, June 3, 2010
“I deeply regret my comments I made last week regarding the Israelis and the Palestinians. They do not reflect my heart-felt belief that peace will come to the Middle East only when all parties recognize the need for mutual respect and tolerance. May that day come soon.”
But this apology failed to save her job, so…

Helen Thomas, December 2, 2010
When a reporter from the Detroit News asked about her statements of May 27th,
“I stand by it. I told the truth,”

Helen Thomas is through and through a Democrat. Why in the world is it that American Jews solidly vote Democrat?