“MORE FLEXIBILITY AFTER MY RE-ELECTION”

About a year ago President Barack Obama was caught on an open mic saying to then Russian President Medvedev that he, Obama, would have more flexibility after the election.  What the Russian leader heard of course was – Russia will have more flexibility if Obama is re-elected.  And so they have.  And so has Iran, Syria, Libya, Egypt and the whole Muslim Middle East.

Fifty two Americans were held hostage for 444 days during Jimmy Carter’s presidency.  The day Reagan was sworn in replacing Carter as President, Saddam Hussein knew he had lost his flexibility and immediately released all hostages.  Less than a week after Obama’s re-election Syria launched rockets into Israel’s Golan Heights.  It is the same Golan Heights that Syria invaded and started the 7 Day War in 1967.  Now Assad knows all he has to fear is a demand from the U.S. that he stop annoying Israel and a request for negotiation.  America isn’t the only nation that lost the election; Israel lost too. 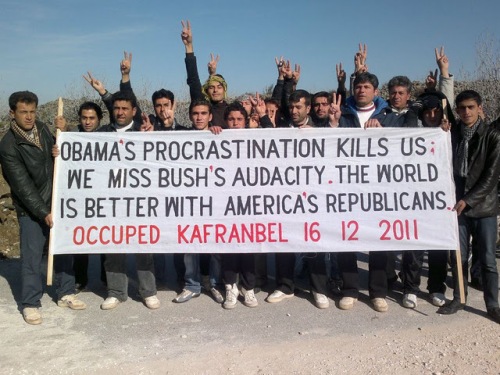 5,000 CIVILIANS HAVE BEEN KILLED BY ASSAD WHILE OBAMA TALKS