The Times piece is a good article about how the tide is turning on warming (sorry about the mixed metaphors).

Big man loses big job
Kwame Kilpatrick is sentenced to jail. Loses job as mayor of Detroit, at least until the next election. 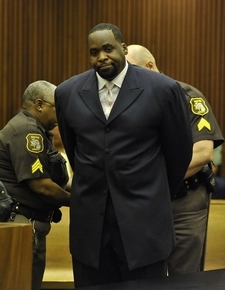 The cuffing of Kwame

Wednesday
The state of rhode island has spent the money it owes its citizens as tax refunds
Random Thots sees no reason to continue using capital letters when referring to a state like ri that has no capital.

Friday
Curtis Slewa makes a fool of himself
It’s a shame. Curtis is not a fool but you would not know it by his anti-Cuomo antics. Click for the video.

This entry was posted in News and tagged Carville, Kwame, Rasmussen. Bookmark the permalink.