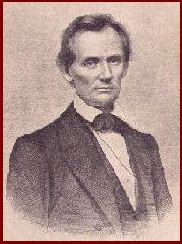 President Abraham Lincoln made his public address at Cooper Union in New York City on April 27, 1860.  Six weeks later the Confederates fired on Fort Sumter starting the American Civil War.  It was Lincoln’s final speech prior to the war.

An eyewitness that evening said, “When Lincoln rose to speak, I was greatly disappointed. He was tall, tall, – oh, how tall! and so angular and awkward that I had, for an instant, a feeling of pity for so ungainly a man.” However, once Lincoln warmed up, “his face lighted up as with an inward fire; the whole man was transfigured. I forgot his clothes, his personal appearance, and his individual peculiarities. Presently, forgetting myself, I was on my feet like the rest, yelling like a wild Indian, cheering this wonderful man.”

Lincoln’s law partner. William Herndon, who was not present but knew the speech, said it was “devoid of all rhetorical imagery.  It was constructed with a view to accuracy of statement, simplicity of language, and unity of thought. In some respects like a lawyer’s brief, it was logical, temperate in tone, powerful – irresistibly driving conviction home to men’s reasons and their souls.”

The facts with which I shall deal this evening are mainly old and familiar; nor is there anything new in the general use I shall make of them.  If there shall be any novelty, it will be in the mode of presenting the facts, and the inferences and observations following that presentation.

In his speech last autumn, at Columbus, Ohio, as reported in “The New-York Times,” Senator Douglas said: “Our fathers, when they framed the Government under which we live, understood this question just as well, and even better, than we do now.”

I fully indorse this, and I adopt it as a text for this discourse. I so adopt it because it furnishes a precise and an agreed starting point for a discussion between Republicans and that wing of the Democracy headed by Senator Douglas. It simply leaves the inquiry: “What was the understanding those fathers had of the question mentioned?”

What is the frame of government under which we live?  The answer must be: “The Constitution of the United States…”

About midway in the speech:

I would say to them [Democrats in opposition to ending slavery]: – You consider yourselves a reasonable and a just people; and I consider that in the general qualities of reason and justice you are not inferior to any other people. Still, when you speak of us Republicans, you do so only to denounce us a reptiles, or, at the best, as no better than outlaws. You will grant a hearing to pirates or murderers, but nothing like it to “Black Republicans.” In all your contentions with one another, each of you deems an unconditional condemnation of “Black Republicanism” as the first thing to be attended to. Indeed, such condemnation of us seems to be an indispensable prerequisite – license, so to speak – among you to be admitted or permitted to speak at all. Now, can you, or not, be prevailed upon to pause and to consider whether this is quite just to us, or even to yourselves? Bring forward your charges and specifications, and then be patient long enough to hear us deny or justify.

Lincoln ends with this pledge:

Neither let us be slandered from our duty by false accusations against us, nor frightened from it by menaces of destruction to the Government nor of dungeons to ourselves. LET US HAVE FAITH THAT RIGHT MAKES MIGHT, AND IN THAT FAITH, LET US, TO THE END, DARE TO DO OUR DUTY AS WE UNDERSTAND IT.

Today’s post is courtesy of Abraham Lincoln Online.  Visit them for everything Lincoln.