WHAT FREE MARKETS? NOT HERE.

When Sen. Dick Durbin stood up in the Senate chamber and told the American public not to do business with a bank he didn’t like, he threatened the free market system.  When the President of the United States confirmed and added to the senator’s condemnation, the free market system ceased to exist.

Free is free.  Half free is not free.  What we have is coercive capitalism, a form of fascism where private ownership of the means of production of goods and services is allowed, but where management is not free to follow the dictates of the market.  This, along with crony capitalism has been described by some as the new face of socialism in America.

John Hinderaker at Power Line has written an excellent piece that begins “Nice Bank You Have Here…, a shame if anything should happen to it… The Democrats took gangster government to a new level today…”  It’s an excellent post and falls into the category of required reading.  Don’t miss it.

Socialist leaders have long realized the challenge of establishing the Marxist form of socialism in a democracy like the United States is an insurmountable one.  A strong and prosperous middle class would never willingly accept a government that would appropriate ownership of private enterprise.  The alternatives are to employ force with a violent revolution (a very bad choice) or to allow private ownership but control it.

Control comes in many forms.  Durbin-Obama coercion is just one of them.  Other means of control include appointing czars to oversee various industries, misuse of executive orders, outright flaunting of established law and the passing of bills that are vague, thereby leaving the specifics to be set by the whims of the bureaucracy as dictated from above.  Go along get along becomes a near necessity.  Those who do more than go along, get along even better.  From Solyndra to GE, this is the new face of socialism in America. 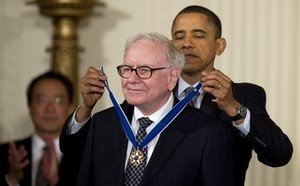 WARREN WINS THE COAT OF MANY COLORS

As folks who speak in the vernacular would say, this photo ‘got to me’.   I met Warren Buffet only once.  It was in Tower 2 of the World Trade Center. The occasion was a luncheon at the offices of the New York Society of Securities Analysts where I was a member at the time. Perhaps my reaction is just a personal one due to a sensitivity heightened by the timing, so close to 911.

The Presidential Medal of Freedom is an award bestowed by the President of the United States and is the highest award of honor given to a civilian.  It recognizes those individuals who have made “an especially meritorious contribution to the security or national interests of the United States, world peace, cultural or other significant public or private endeavors.

Warren Buffet is a man of integrity and good will.  Lenin called such well intended people who supported his reign “useful idiots”.  I find it grating to see our President grant such a high honor to someone best known  as a political advocate for one of the President’s controversial political positions.

I suppose there was no other choice. We do not have a Medal of Useful Idiocy, although a medal for cowardice was actually proposed a couple of years ago. It was to be called the Medal of Courageous Restraint. Click the link to see what we wrote about it. It was a good post.

YJCMTSU  (You Just Can’t Make This Stuff Up)

COZY PAYS OFF FOR IMMELT AND GENERAL ELECTRIC

2.GE owns NBC which, in partnership with Microsoft, owns MSNBC.

3. Obama said publicly that the reason he included India in his Asian tour was to secure a turbine contract for GE.

4. GE is not a bank. But GE received 340 B dollars from the TLGP (Temporary Liquidity Guarantee Program), a bailout program for which only banks qualify. And yes, that’s a B.

5. No restrictions were put on CEO Jeffery Immelt’s salary as done with other recipients of bailout money.

8. Why did GE get bailout money in the first place?

9. GE was in front of the line for a waiver of the burden of Obamacare.

GE is a leading maker of wind power turbines, solar panels and other green technologies that derive their profits from government subsidies not from market demand. Looking at Government Motors and Government Electric we get a glimpse of National Socialism. In a capitalist society, in a business, government may be your friend. In a National Socialist society government is your partner. Collusion and corruption become keys to your success. Competition is handled by selective regulation, not by superior innovation.

The Chevrolet Volt is beginning to look like it was manufactured by Atlas Shrugged Motors, where the government mandates everything politically correct, rewards its cronies and produces junk steel.

This is the car that subsidies built. General Motors lobbied for a $7,500 tax refund for all buyers, under the shaky (if not false) promise that it was producing the first all-electric mass-production vehicle.

The Volt will only run 25 to 50 miles on a battery charge. Then a gasoline engine requiring premium grade fuel comes on to recharge the battery. Batteries do not last the life of the car. Replacements are exceedingly expensive and disposal presents an environmental hazard challenge. Sales were 326 in December, 321 in January, and just 281 in February.

Recently, President Obama selected General Electric CEO Jeffrey Immelt to chair his Economic Advisory Board. GE is awash in windmills waiting to be subsidized so they can provide unreliable, expensive power.

Consequently, and soon after his appointment, Immelt announced that GE will buy 50,000 Volts in the next two years, or half the total produced. Assuming the corporation qualifies for the same tax credit, we (you and me) just shelled out $375,000,000 to a company to buy cars that no one else wants so that GM will not tank and produce even more cars that no one wants. And this guy is the chair of Obama’s Economic Advisory Board?

Consumer Reports got about 30 miles to the gallon of premium fuel; which, in terms of additional cost of high-test gas, drives the effective mileage closer to 27 mpg. A conventional Honda Accord, which seats 5 (instead of the Volt’s 4), gets 34 mpg on the highway, and costs less than half [the cost of a Volt] even with the tax break

Here we have a government that is building an overpriced car at a loss, paying people $7,500 to buy it and still can’t sell it. It’s the perfect example what you get when the free market system is replaced with central planning – a surplus of unwanted products, shortages elsewhere and industry/government collusion to make it all happen.

OLBERMANN’S FALL FROM DISGRACE
Upon reading something about a 30 million dollar contract, my thought was… hate pays, but only in money. If reports are correct, Olbermann’s personality is the same off-camera as on. When off-camera his anger radiates in all directions we’re told, not just toward the political right but to staff and management as well. Keith Olbermann, by all appearances, is an angry and hateful man. Hate eats a person from the inside out. Hate is cancer of the soul.

Bush and Palin were favorite targets of the MSNBC star. These are two obviously very happy people. Olbermann is not. Targets of hate can rise above it because it comes at them from without. Haters are stuck in their own misery because one cannot rise above that which dwells within.

IMMELT’S REWARD
President Obama chose Schenectady for his nationally broadcast “jobs” speech. Schenectady has long been a home to General Electric. Jeffrey Immelt is Chairman and CEO of GE. The company is dominant in the city because it is the largest and oldest of the major employers in the region.

As he spoke, Obama highlighted what he had done to create jobs for MSNBC. Correction – for GE, the owner of MSNBC. In fact he said, the very reason he went to India was to negotiate a contract that will bring 1200 new jobs to General Electric’s manufacturing operation in this city in upstate New York.

Why Schenectady? Why GE? One cannot help but wonder, was it Immelt’s reward?