In brazen defiance of law, President Obama has made four controversial appointments to public office without the approval of Congress as is required by the Constitution.

John Boehner described the president’s move as “an extraordinary and entirely unprecedented power grab by President Obama that defies centuries of practice and the legal advice of his own Justice Department.”  The Speaker is a public figure and must be diplomatic when making public statements.  We are not inhibited by any such restrictions so we call it for what it is, a defiant act of dictatorship. Barack Obama’s action in this instance is consistent with that of a neo-totalitarian government, not a democracy.

John Hinderaker, a lawyer and one of the founders of the Power Line blog has provided excellent coverage on this important issue.  You can read about it there.  There is no limit to where this president may take the country if he is not stopped.

WHAT OTHERS ARE SAYING

Paul Mirengoff at the Power Line blog disputes the presumptions of Harvard historian James Kloppenberg who has written a book called Reading Obama: Dreams, Hopes, and the American Political Tradition, in which Kloppenberg compares Obama favorably to the founding fathers. Mirrengoff’s post is a very interesting read.

I don’t know where she got it, but Blonde Sagacity posted this photo with the suggestion – CAPTION IT. Click the image and study each ones eyes. 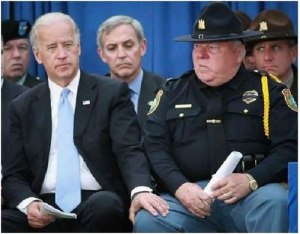 From  Charlie Daniels‘  Soapbox
“It happened in Greece, it’s happening in France and it will happen anywhere the ugly serpent of socialism raises it’s head, including the United States of America.

Socialism is flawed by design. It discourages competition, over taxes the productive, and in its feverish effort to bring all society down to the lowest common denominator, eventually destroys everything in its path.”