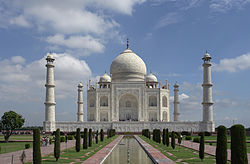 Forty taxpayer owned aircraft in all are being assigned to the trip. The entire 800 rooms in the hotel have been booked and the regular staff has been given leave. Apparently the Obamas are bringing their own cooks, hairdressers and teleprompters. Only two things are missing, the guest list and comprehensive press coverage.

One thing not missing, however, is chutzpah. Forgive me Barack; you probably don’t like that word. It’s Jewish. The English word is “audacity”. There I go again, you don’t like the English either. But audacity it is and audacity can be a good thing, I’ll grant you that.

And hey dude, have any of your fellow Democrats complained that turning a 30 minute speech into an expensive overseas extravaganza just before an election is not helping their cause? Or did I err again? Democrats are still your fellow travelers, are they not?

While we’re chatting I have another question. You told a Hispanic audience that those who fail to join you in whatever you support deserve to be punished. I listened to your comment but found it a bit unclear. Did you mean just Hispanic Americans or any American that fails to vote your way “must be punished”?

A word of advice, Barack. We pundits, left or right, can say things like that. It is our job to criticize, yours is to lead. We have little stature to lose. But it’s not befitting the head of a nation, any nation, to declare its citizens should be punished if they vote in a manner that displeases him. It makes a President look dictatorish, know what I mean?