WASHINGTON BY THE WEEK

In the future this feature will be titled LAST WEEK. The old title was a bit too restrictive.

Week ending May 7, 2010
Monday
Obama reveals the size of our nuclear stockpile to our enemies.
Obama, as our President, sits in for us in the world wide poker game played between sovereign nations. It is a game of life and death. Our leader chooses to show his hand for all the world to see. We need a new leader.

Bloomberg to Couric – Times Square bomber may have been Obamacare protester
We all know better now. Hizzoner should have known better then.

Tuesday
Schwarzenegger ends his support for offshore oil drilling
I told you. He isn’t a Republican.

Wednesday
Osama bin Laden is in Washington, D.C.
Ahmadinejad said so, and he ought to know. He was kidding, of course. (???)

Bob Woodward is doing Barack Obama
This one is guaranteed to be a best seller. Scheduled for September release.

Yahoo News reports “Congress makes too many vague laws.”
If Yahoo thinks that’s news, it explains why their name is Yahoo.

Thursday
Al Sharpton speaks for Karl Marx
“No Social Justice Until Everything ‘Equal in Everybody’s House’.”
I presume anyone owning two cars is going to have to give one of them to someone who has no car. It’s the only path to justice, especially of the other person won’t work and save to earn one. 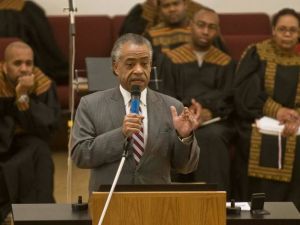 Friday
Unemployment comes in at 9.9% or 17.1% depending on how you look at it
If Obama wants to replicate Franklin Roosevelt he has to get higher numbers than that. FDR got the official number up to 23.2% after being in office for two years. To be fair, he had a head start. They were 18% when he took office. But he did hold them up very well. Unemployment was still 17.4% at the end of his sixth year.