THUGS ON THE LAWN

The Age of Obama

Service Employees International Union (SEIU) is the fastest growing labor union in North America and second in size only to the teachers National Educational Association (NEA). While unions like the AFL sit across the table from private industry employers the SEIU sits across the table from the US Government. When Democrats are in power there is but one side to the table.

On May 16, the SEIU and the National Peoples Action (NPA) group joined hands to organize and transport 14 busloads of people from Washington DC to the Maryland home of Greg Baer, an executive in the employ of Bank of America.

Some 500 in number, they trampled his lawn and blocked the doorway to his home chanting “greed”. Mr Baer’s 14 year old son, home alone, was frightened they might break in. He locked himself in the bathroom in fear and called his dad.

The invaders had no permit to demonstrate. There were no police to preserve order. There was no regular press to record the event. That was all according to plan. But there was one thing the organizers did not count on: Fortune Magazine’s Nina Easton happened to live next door. She photographed and reported the event. 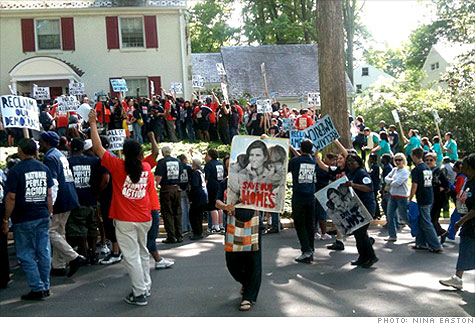 Ms. Easton asked SEIU spokesman Stephen Lerner to comment. His chilling response was “People in powerful corporations seem to think they can insulate themselves from the damage they are doing,” By that statement he was claiming a right to organize an army to harass and intimidate any business man he deemed to be “damaging”.

The Washington DC police had assisted with an escort and safe passage for the demonstrators to the limit of their jurisdiction. They preserved the clandestine nature of the operation by omitting any notification to Maryland police of the approaching 14 bus parade. No local police were present to escort Mr. Baer through the insult hurling crowd on his property as he sought to reach his son, or to free his property from the aggressors.

Personal and sometimes violent intimidation were once familiar tactics used by labor unions in America. These same sort of tactics for gaining and holding power are among the means urged by Saul Alinsky in Rules for Radicals. Freedom from such tyranny is an inalienable human right. The first role of government is to protect its citizens against attack from within or from without. However, the work of our President was to teach community organizations like the Chicago based NPA on how to gain power by employing such tactics. “Houston – We have a problem”.

Random Thots will have more to say on this issue in future posts. When a union turns thuggish at the same time that it heads the most frequent visitor list at the White House there is more to it than one mangle lawn and one frightened young boy.

This entry was posted in Political polemics and tagged Alinsky, Obama, SEIU. Bookmark the permalink.

One response to “THUGS ON THE LAWN”