THE DEBT AND DESTINY OF THE UNITED STATES

Why the Debt Ceiling Fight Is So Fierce

Really now, how serious is this national debt problem?.  Figures fly at us like a fleet of locusts.  The onslaught of numbers comes from all directions, talk radio, think tanks, politicians and from agencies of the government itself.  The size alone makes it impossible to relate.

We have been told how many freight cars it would take to hold a trillion one dollar bills and how many times a trillion dollars worth of sawbucks would go around the world laid end to end.  But that doesn’t tell us anything useful; it just shows the numbers are big.  We knew that.  Then we read about percentages of GDP.  What does that mean?  How can we relate?  How can we make sense of it?  We do it by relating expenses and debt to income, not to freight cars or GDP.  Our table relates the financial state of the nation to basic family finances.

The government numbers in the table are fixed.  Except for Unfunded Liabilities which is an estimate; the figures are reported facts.  The family side is a “what-if” table.  It answers the question — if a family had an income of 80,000 dollars with spending and debt in the same ratio to family income as the government ratios, where would the family be?

The answer is nearly unimaginable.  Such a family would have a half million dollars in outstanding debt, over 600,000 dollars in additional future commitments, no savings and still spending nearly 60% more than they earn.  Is it any wonder the rating agencies are prepping us for a downgrade?  Is it any wonder why there is a stalemate in Congress when some members, with the backing of the president, actually want to increase federal spending and debt while others insist on cutting both before it’s too late?

If your income is half the 80,000, cut the rest of the numbers on the family side in half.  If your income is double, double them.  If you have a blog please feel free to take the table and use it as you wish.  The more distribution it gets, the better. 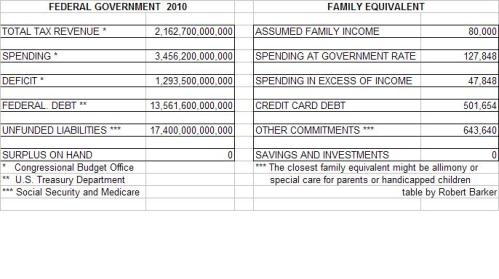 House leader Boehner apparently has found it impossible to deal with Obama because the President first agrees before he doesn’t. In a Saturday conference call the Speaker told colleagues he told the President,

“As I read the Constitution, the Congress writes the laws and you get to decide what you want to sign.”

Wow! Now we know why Obama was so angry in his Saturday night prime time address. Go, Boehner, Go! Hang tough. I didn’t know you had it in you.

As I see it, this has put the ball squarely in the Democrat’s court. The House passed the only debt limit bill ever presented in either chamber and passed it with an overwhelming majority vote. It is up to the Senate to agree to it as it stands or offer modifications that might be agree upon. Obama has been taken out of the loop.

If Boehner’s strategy works, the President’s only choice will be to sign the bill or veto it. Either way he loses. It’s a high risk strategy that could misfire if negotiations fail in the Senate. Voters in both parties are unhappy with their elected officials. All the Republicans need to get it through is a couple of Democrats with wobbly seats facing re-election. Harry Reid would be in no position to fail to bring it to a vote.

FAA SHUTDOWN — THE WAR OF OPINIONS

That is Ms. Bendery’s headline at the HuffPo. How would you read it?

Is it news? No, the FAA is not shut down either partially or fully and no one has been left without pay. Okay, let’s give a little poetic license and allow that Jennifer may have meant Congress May Force Shutdown…; then would it be news? No, it would be opinion.

Another journalist might say Harry Reid Forces Shutdown… or President Obama Forces Shutdown…, all equally plausible opinions. The Republican House won’t budge (yet), Harry Reid won’t allow the bill passed in the House to clear the Senate and Obama says he would veto it anyhow. So who would be the responsible party if some air traffic controllers were to become furloughed as a result of the impasse? It would be, and forever remain, a matter of opinion.

The parties in Washington are fighting a war over public opinion. In that sense, the Republicans are fighting on their opponent’s home turf. Democrat’s, good ones and bad, have always been the masters at appealing to fears and emotions. They are the wordmasters and words are what shape public opinion.