If you feel devastated by the results of the election and want to get away from American politics for a while, we have a suggestion for where you can go.  No, it’s not that infamous place where the sun doesn’t shine.  Nor is it a place reputedly to be insufferably hot.  Actually, if you decide to go there you may think it is heaven itself.

To keep the location exclusive we can’t reveal it right on this page where anyone could see it.  But if you click on the image you will be told where you can go.

A SNIPPET ABOUT THE CHEVROLET VOLT

The snippet is from a serious blogger with a sense of humor, or at least a good sense of the ridiculous or he wouldn’t call himself Senator Blutarsky.  The moniker is fitting if you consider the Volt is somewhat of an Animal House product.  Here is the Senator’s bottom line.

THE BOTTOM LINE: even with generous assumptions, the first generation of the Chevrolet Volt will consume about $1 billion in federal tax credits, and STILL result in an economic loss to GM shareholders in excess of $600 million over its lifetime. Without the subsidies, the cumulative loss would triple to $1.8 billion.

Go to the Senator’s own words if you want to read the nitty-gritty above the Bottom Line.  Be forewarned, he uses a lot of numbers.  Why not simply divide $1 billion by the number of people who pay taxes to see how much of your money has been invested in the Government Volt.

Let it go at that, watch tonight’s debate and don’t neglect to vote.

SHOULD NINCOMPOOPS BE ALLOWED TO VOTE?

The following is taken from an item in Real Clear Politics.  The post is accompanied by a video that must be seen to be believed.

Howard Stern contributors Sal and Richard traveled to Harlem to interview Obama supporters and ask them why they are voting for Obama.

Stern and his crew ask denizens of Harlem various outrageous questions, including if they believe Obama will find and kill Osama bin Laden; if Romney is a Muslim and if Obama is a Mormon; if Obama made the right choice by picking Paul Ryan as his running mate and if he did it because he is black.

One interviewee was under the impression that 2008 Republican nominee John McCain is also running this time.

“Just trust me, not one person knew that Osama bin Laden was dead,” Stern said during the segment.

“Well, we’re obviously dealing with a whole population that doesn’t listen to the newscasts or read a newspaper,” co-host Robin Quivers said.

People who are this clueless are pawns for manipulation by the most unsavory of politicians.  It gives rise to the question of whether citizenship alone should be enough qualification to vote.

Homes in Germany have more doors than windows.  The only thing there is more of than doors is rules.  To go from the kitchen to the dining room in my hosts home there are two doors that must be opened and closed on the way.  And there are three thick doors to negotiate to get from the bedroom to the bathroom.  Excuse me, I should say to the toilette.  In most cases I make it through all of them in time.  There must be another rule against door knobs; there isn’t a knob to be seen anywhere.  They all have large sturdy handles so you can open them with your elbow when your hands are full.

There is no toilet in the bathroom.  If you need a toilet, that’s a different door.  Once inside, you may see a little graphic sign there that tells a man that “Stehen ist verboten!”  A man’s aim is not trusted in some homes in this country; he must sit the way the ladies do.  And if serious business has been completed the product will neither sink nor float in the bowl.  It sits high and dry on a little shelf until you push the button to whisk it away.  But don’t look for a handle to flush.  All the handles are on the doors.  Look for two buttons that may be that may be somewhere on the wall.  Intuition will tell you whether pushing the small button or the large one is the most appropriate.

If your bedroom is on the second floor it probably has a door to the outside and nice little balcony.  If you want a little air in the room just lean the whole door into the room.  It can be tipped in as though the hinges were along the bottom instead of on the side.  It doesn’t take long to figure out how to manipulate the handle to accomplish that.  Most any Americans learn to do it in less than ten minutes.  Then it’s a fun thing to do.

Now about those rules, our hosts went out to buy a variety of breads and pretzels to go with the liverwurst and baloney slices for breakfast.  They came back empty handed.  The shopkeepers who sell bread are not allowed to be open on Sunday, but gas stations are, and some of them sell bread.  However it turned out there is yet a new rule that gas stations are only allowed to sell bread on Sunday to people who are from out of town and can confirm that by driving in with a car that has an out of town license plate.  The German people are proud of their rules but still complain when a new one like this comes along.  Angela Merkel got the blame for our stale bread and shortage of enough breakfast pretzels to go around.  She is out of favor in this household.

After nearly two weeks on this trip to Germany it is time to go back home to the land of a few flimsy bedroom doors and wide open lawlessness, especially on Sundays; home to America where a liter of beer costs more than a cup of coffee, if you can imagine that.  I will miss the pristine beauty of Bavaria where there are no paper cups littering the roads because there are no paper cups.  There is more I will be sorry to leave behind, but a helping of fried eggs and bacon or even a donut beats still beats liverwurst and pretzels for breakfast anytime.

The debate would be like the New York Yankees taking on the Chicago Cubs, except funnier.

A very wise man teased me with a question about 3 months ago.  What attributes would the ideal VP candidate have?  He suggested the ideal candidate would be someone who is black, a woman, well known, experienced in government and not from the Northeast.  He had Condaleeza Rice in mind of course.

It didn’t take a lot of culling to find this very brief video of one of Uncle Joe’s Bidenisms.  It is from a speech he made yesterday declaring that “Children should be educated to the degree they are educable.”  It was a minor error of course, but it was a mistake Condi wouldn’t make because Condi is fully educablated.

HERE IS HOW THE EIERSCHALEN-WHATEVER WORKS

Yesterday I guess I was feeling a little too smug about having my very own eierschallensollbruchstellenverursacher.  One reader suggested how I could use it and he didn’t even know what it is for.

The young lady will demonstrate.

It’s as simple as that!

HIGH PRICED BULBS FROM HOLLAND AGAIN, BUT THIS TIME NO TULIPS

Who would announce a 10 million dollar prize for the development of an affordable American made 60 watt light bulb and then award the money to a foreign company that prices the affordable bulb at 50 dollars and doesn’t manufacture it in the United States?  There are only two possibilities, a fool or the U.S. government. 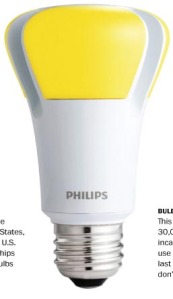 HERE THEY ARE, COME AND GET ‘EM, 50 BUCKS APIECE

The bulbs do last longer; the claim is 10 years in 8 hour daily use.  They wear out gradually and diminish in brightness as they age so you may want to replace them sooner.  The bulbs generate light in the spectrum referred to as warm which means not as white as an incandescent bulb.  That may be fine if you want to use 6o watters for soft romantic room lighting, but they can be a bit of a strain for reading.

Philips says it is not manufactured in the U.S. but it’s assembled in Wisconsin and some of the parts are made in California.  How an item like a simple light bulb can be manufactured in one country without being assembled there is not explained.  Perhaps it has to do with the bulb costing 50 dollars.

What’s next, a 5 thousand dollar affordable 20 inch lawnmower that doesn’t require gasoline, made in China but the wheels are put on in Idaho?  That’s my comment for today; stay well and don’t forget to flush twice.

HYPE and BLAME, THAT’S HIS GAME, THE GREAT PRETENDER

The Republican National Committee (RNC) is preparing this new bumper sticker which, I presume will be offered on their website.

DO YOU REALLY WANT MORE OF THE SAME?

Hype and blame, what a shame
on nothing more he rose to fame.
And he did no good
‘though he said he would.
The time has come to end this, his game

Whaddya think, should we publish it?

At the annual White House Correspondents’ Association Dinner, Jimmy Kimmel joked ““Everything that is wrong with America is here in this room.”  The room was filled with politicians and journalists, so where’s the joke?  There wasn’t a single plumber or a carpenter in the place.  The builders of America were absent, only the demolition crew showed up.

Do we really need this annual show?  John Hinderaker writes in Power Line that it is an event where “The politicians pretend to engage in self-deprecation that shows they don’t take themselves too seriously. The comics pretend that they are just trying to be funny, lampooning politicians impartially in search of laughs. But, even though some of the lines are indeed funny, the premise of the event is fundamentally false. In fact, politicians, comedians and even the celebrities present are pursuing an agenda that is both self-aggrandizing and political”.

Like all roasts, it is also a DIDDID event.  If you are going to be a target you have no choice whether or not to go because you are damned if you do and damned if you don’t.  The Brits do a good job laughing at themselves, we don’t.  Humor is a fragile thing and goes bad when it’s not handled carefully.  The best humor is 100% fun for 100% of the audience.  One little barb can render a joke flat.  A not-so-hidden running agenda turns even funny humor bad.  There is no way in Washington, as they say, that you can assemble a room full of politicians and journalists without an agenda.  Let’s stop pretending we can. 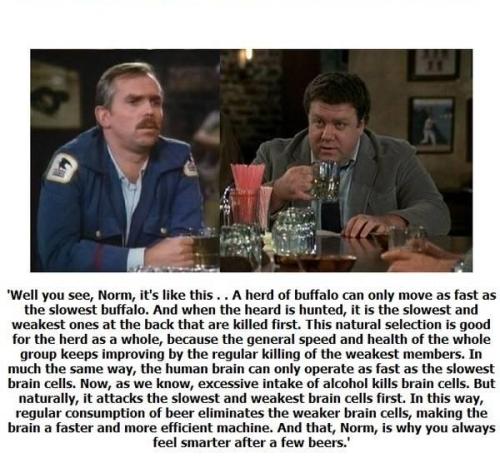