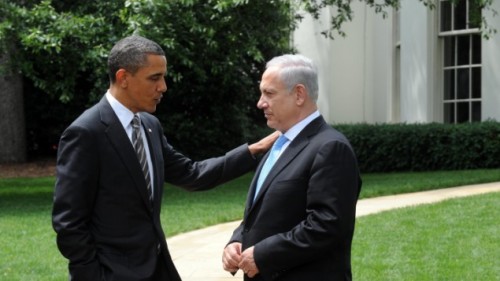 "Now this is what I want you to do, Ben"

Have you noticed how often Barack Obama puts a condescending hand on another head of state?  Have you noticed the selectivity upon whom the gesture is applied?  To Saudi and Chinese leaders he bows in humble respect.  It is upon the shoulders of Western leaders that he lays the hand of superiority.  A handshake is a symbol of acceptance, respect and equality.  A hand on a shoulder is something quite different; it emanates from a paternal instinct.  It says – I’m your senior, be not concerned, I’ll take care of you.  It is a gesture born of an inner feeling of superiority, not from a sense of equality.

When Obama bestows the gesture upon Israeli leader Benjamin Netanyahu it takes on the added dimension of a mafioso kiss.  It also troubled me when Obama had his photo taken in the oval office showing the bottom of his shoes while talking to Netanyahu.  In the Muslim world that’s the ultimate demonstration of disrespect.  It troubled me even more when, in an unprecedented move by any U.S. president, Obama refused to dine with the visiting Israeli head of state, relegating his dishonored guest to eating alone.  That’s an insult everyone understands.

It troubles me still to see the Israeli head of state need to stand before this contemptuous president of ours, hat in hand to plead for support.  It would be humiliating for a lesser man.  But the Prime Minister shows no disrespect and does it because he puts the welfare of his people above all personal considerations.  I envy the people of Israeli for having such a leader.