IS CARVILLE ADMITTING OBAMACARE IS AN ALBATROSS FOR THE DEMOCRATIC PARTY? 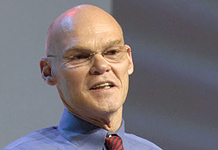 If the Supreme Court overturns Obamacare “I think this will be the best thing that has ever happened to the Democratic Party,” according to Democratic strategist James Carville.  Puzzled?  Here’s his reasoning,

“You know, what the Democrats are going to say, and it is completely justified, ‘We tried, we did something, go see a 5-4 Supreme Court majority’.”

Carville … predicted health care costs will only increase in the future, in which case Republicans will be to blame for leading the drive to expel a federal program designed to help Americans cover those costs. (CNN)

“Then the Republican Party will own the healthcare system for the foreseeable future. And I really believe that. That is not spin,” Carville said.

Pass a bad law and then root for it to be repealed so you can blame the other party for the mess you created.  Good plan, Mr. Democratic Strategist.

Comments coming from Supreme Court Justices in response to Obama’s Solicitor General have been a riot.  Watching the Court hasn’t been this much fun since the Justices overturned Roosevelt’s NRA (Google it).